Posted on February 8, 2014 by tonesmiths 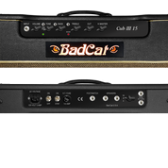 The other day I had an opportunity to demo the final version of the Cub III 40. As a Bad Cat beta tester, I’ve had the privilege of sampling the Cub III series throughout it’s various developmental stages, as well as the opportunity to provide input along the way. There are several groundbreaking features that have me very excited about this new series. I apologize that I didn’t shoot any video (online videos never do justice anyway). I’ll do my best to describe every new feature in detail.

The Cub III features the same Sampson C30 inspired preamp as the twin channel Black Cat. Like the Black Cat, it’s available with a 15w (2xEL84), 30w (4xEL84), or 40w (2xEL34) power section. The 40w version covers the tones of the Stella and Luca models by combining both circuits into one model. The 15 and 30 watt versions are available as a head or combo and the 40 watt version is available in head form only (subject to change) The Cub III is also available with or without spring reverb.

Big George, John, and Mike at Bad Cat pulled out all the stops to make this new series the most game-changing tube amp design on the market. There are several new features, a few of which are completely original innovations. Here are few worth mentioning:

Previously the Cub II could be ordered with either a 12AX7 or an EF86 in the V1 position. The Cub III comes equipped with a 12AX7 and an EF86 installed. Either tube can be placed in the circuit via the mini toggle on the faceplate or the included footswitch. Though the Cub III is in theory a single channel amp with one set of knobs, the tube select function opens up much of the versatility traditionally found in twin channel amps.

The other button on the included footswitch activates a 3-5 db lead boost when the bass/treble mode is being used. Since it boosts the tube used for the tonestack it does not provide a boost when the 5 position tonewheel is selected. This boost can also be manually selected using the mini toggle located along the top between the bass and treble knobs.

The Klimek (Big George’s last name) or K master volume is in my opinion the best thing to happen to tube amps in a very long time. So many other onboard and outboard devices had falsely promised to reduce volume while maintaining tone, that I had lost all hope in attenuation. When George told me his original approach to control multiple variables simultaneously kept 100% of the circuit’s tonal integrity intact, I was more than skeptical.

Man, I ran that amp through it’s paces, gain down/master up, gain up/master down, and… of course… everything cranked! It doesn’t just control volume. It actually lets you cut or boost power to the output tubes without straining them in the least. Cutting the K master reduced volume down to a whisper without changing tone or response. Boosting the K master beyond median gain increased headroom by taking advantage of those huge Bad Cat transformers. It also unleashed those coveted harmonics that can only be produced by power tube saturation.

If you’ve been searching as diligently for uncompromising power control as I have then please don’t take my word for it. Go try one of the new Bad Cat amps for yourself. The K master is now featured on the entire Cub III series.

The new chassis not only improves the shielding of the circuit, but reduces overall weight by about 2 lbs.

Big George went back to the drawing board on this one. He discovered a traditional approach to grounding tube circuits that produces a much lower noise floor than the time saving approaches used by every other guitar amplifier manufacturer.

Bad Cat decided to include a free passive effects loop in all of their amps. Enjoy!

This isn’t new, but the Cub III series includes a 4/8/16 ohm selector

Though the combos and speaker cabinets are still constructed of 13 ply voidless birch for tonal and structural reasons, all headshells are now made of solid Italian Poplar. This material is not only extremely durable, but much lighter than Birch ply. It reduces the overall weight of their headshells by nearly 4 lbs.

As with all Bad Cat Amplifiers, the Cub III comes with a transferrable lifetime warranty.

Please contact us if you would like a price quote for the Cub III 15/30/40 or any other Bad Cat models.